Due to the environmental impact, the drawbacks of the underground foundation of waterfront wharf, such as the deterioration of structural performance and the attenuation of resistance, have attracted wide attention. The reasons for this situation are complex and numerous. Civil engineers are increasingly aware of the advantages of FRP composites as a viable material to solve some problems in the interior structures of complex environments.

Replacing common steel bar with GFRP reinforcement bar can not only solve the problem of rust of traditional material, but also has good fatigue resistance and no magnetism.

Inspired by the successful application of steel-concrete composite structures, when considering economic factors, a new concept of concrete-FRP combination has become a potential feasible solution. Current research in this field focuses on FRP encased concrete, similar to concrete filled steel tube. The main girder of the bridge is replaced by concrete filled with GFRP shell to support the deck made of FRP. This FRP-concrete composite beam and column make good use of the best performance of FRP and concrete. The characteristics of FRP-concrete composite structure, such as high strength, light weight, high stiffness and low price, will change the factors affecting the construction cost of FRP in its popularization and application.

One of the causes of deterioration of bridge structure performance and resistance attenuation is erosion. In traditional design, the use of antifreeze in winter will deteriorate the reinforcement in the structure. FRP is a feasible method to solve this problem. Because FRP has very good corrosion resistance. Since most bridges with deteriorated structural performance and reduced resistance are in important traffic routes, it is extremely important to replace those bridges quickly to avoid long-term traffic interruptions. The use of FRP decks instead of bridge decks with structural performance and resistance degradation is a time-saving method, because these decks can be produced in factories and the site installation process takes only a very short time. In seismic areas, because of the lightweight of FRP composite materials, the inertia force will be reduced in the process of earthquake, and the use of FRP bridge deck will reduce the damage caused by earthquake. FRP pultrusion deck has many advantages over traditional deck. In recent years, people have devoted themselves to the development and research of this kind of high performance, light weight and cost-effective deck system made by FRP. 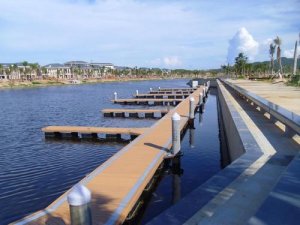