The panels made of fiberglass materials on the market are mainly divided into molded grid panels and pultruded grid panels. The production process is different, and the plates produced have certain differences in performance. From the analysis of production efficiency and production cost, the molded grating has advantages. This article will introduce the knowledge about fiberglass grating. 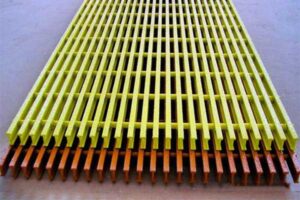 Fiberglass molded grating is mainly gratings, which are formed at one time through molds. It has high resistance to compression and corrosion. Compared with fiberglass pultruded grating, although the production speed is relatively slow, it has greatly improved its bearing capacity. 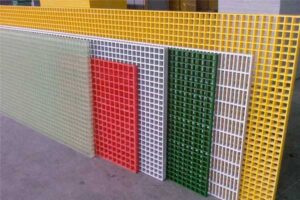 The molded grating is a one-piece hollowed-out plate, while the FRP pultruded grating is a plate assembled by FRP profiles. Generally, the products used to assemble the pultrusion grating are I-beams and round tubes, of which I-beams are used as the main load-bearing surface of the plate, and pipe fittings are used as supports.

In layman’s terms, the molded grating is a one-time molding product, while the pultruded grating needs to make the corresponding profile products first, and then perform secondary assembly and reinforcement.

Relatively speaking, both have high compression and impact resistance, but when the span is relatively large, the molded grating is prone to bending, while the pultruded grating performs better, causing this phenomenon The main reason is that the glass fiber material used in the production of molded grating panels is glass fiber yarn.

For example, in the production of fiberglass grating for car washrooms, in order to ensure the strength and hardness of the plates, it is necessary to use compression molding tools to squeeze them during yarn drawing, so that the glass fiber yarns and resin can be fully combined.

The pultruded grating only needs to place the glass fiber yarn and resin mixture in the correct position for production. Relatively speaking, manual operation is relatively simple, and the only trouble is the later assembly work.

The use of FRP profiles to assemble panels is an external manifestation of the plasticity of FRP products. For example, FRP guardrails, fences, operating platforms, and other products that are widely used in industrial production can be assembled using profile products.